On the anniversary of the "catastrophic failure in the gas distribution system that caused explosions and fires in the Merrimack Valley" on September 13, 2018, Mothers Out Front remembers the community's sacrifices and strength in overcoming the complete disruption of their energy system and their lives. We are proud to be a part of Gas Leak Allies newly released report Rolling the Dice: Assessment of Gas Safety in Massachusetts as "this report is the response of citizens and scientists motivated by a desire for a safe, healthy, and just energy system."

Rolling the Dice: Assessment of Gas Safety in Massachusetts analyzes documented incidents and publicly available data about the gas distribution system that add up to an urgent message to legislators, the executive branch, municipalities, and gas companies to take action now. It details ways that each of these decision-making entities can implement changes that will greatly enhance public safety in the near term and in the future. 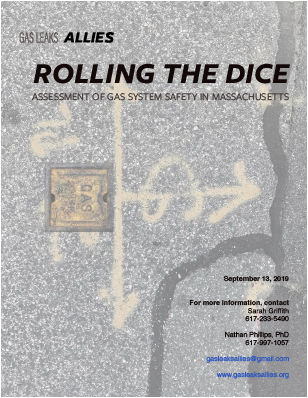