Congratulations to Arlington Mothers Out Front, exceeding their goal to get opt-ins for CCA and for being #InTheNews!

"Since CCA rolled out in August 2017, Mothers out Front set goals for the amount of opt ups they wanted to see. From August to December, their goal was 200. They ended up with 395.

'And then we thought, okay that was just because everybody got that letter so we said okay for this next year, 2018, we’ll set a goal of an additional 100 but then by April we’d blown through that so now we’ve had to up our goal again,' said co-coordinator Nili Pearlmutter.'"

Read all about it!

Letter to National Grid regarding Union Lockout from MA Mothers

We at Mothers Out Front are deeply concerned about National Grid's lockout of union gas workers. As members of a national movement of mothers and others mobilizing for a livable climate and protecting the health and safety of all children, we urge you to resolve the issue quickly. While we are outside of the negotiations and can’t comment on the details of the dispute, we are concerned for the workers, their families and the communities you serve.

With Legislation Pending, Town Hall to Address Climate Change in JP on July 12

Mothers Out Front Jamaica Plain is keeping the pressure on!

Following a landmark 35-0 vote, the Massachusetts Senate passed a comprehensive climate bill on June 14 aimed to “promote a clean energy future.” Now the bill’s future lies in the hands of the Massachusetts House. The legislative session, and the bill’s chances for passage, end on July 31.

Mothers Out Front in Brookline #InTheNews!

The signs are the product of Mothers Out Front Brookline, a group of “mothers and others” attempting to bring attention to non-lethal gas leaks. These leaks are responsible for the death of approximately 400 trees throughout Brookline, according to Brookline Mothers Out Front. Each of the signs mark spots where trees have died due to gas leaks from Brookline’s deteriorating underground pipeline system.

“There’s no real incentive to change that for a gas company,” said Brookline Mothers Out Front member Susan Helms Daley, who helped spearhead the ghost tree initiative. “So we’re trying to bring some awareness to this issue because it’s really the public who can bring pressure to the gas companies.”

An open letter to Speaker DeLeo from a Winthrop constituent

Speaker DeLeo: You and I live in Winthrop.  Our streets are flooding; the storms are fiercer, more frequent and more damaging; our insurance costs are sky rocketing; but most importantly, our health and our grandchildren’s health–yours and mine–is compromised as our state warms. Please don’t ignore the heat waves, the mold from flooding, the increase in mosquito and tick borne-disease, the allergies and asthma, the heart and lung effects, the mental stress from losing everything.

In late June, the Mothers Out Front Cambridge team had a busy evening at the Central Square Soccer Nights! We engaged with lots of families and gave out 62 LED light bulbs. LEDs are 85%, or so, more efficient than incandescents and 40% more efficient than compact fluorescents.

Watch the video below!

Last week the Cambridge team held a Spanish-speaking House Party which was high energy and a lot of fun! Minga Claggett-Borne and Mina Reddy co-led the meeting. This party came together because Mina held a focus group at the Cambridge Community Learning Center and met some great women who were interested in energy efficiency. 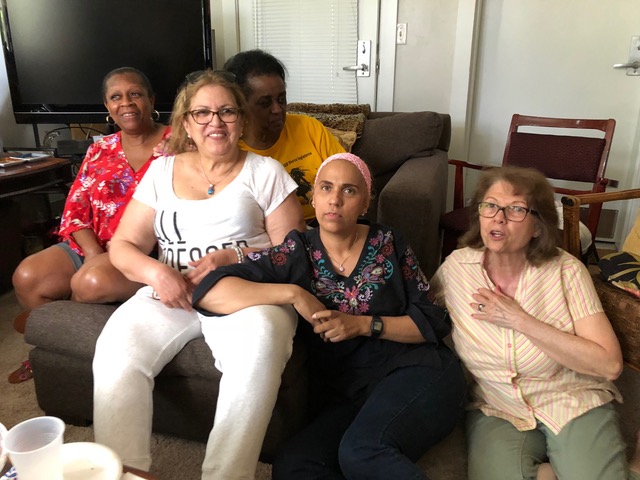 Our Cambridge team kicked off its “Bringing Paris Home” Campaign. Our federal government may have backed away from the International Paris Climate Agreement, but “We’re still in!” was the rallying cry at the kickoff event held at the Central Square Library on Thursday, May 31. About 40 attendees, including City Councilors Sumbul Siddiqui and Quentin Zondervan, gathered to snack on French foods, sing along with Music Out Front, hear an informative presentation, and engage in spirited small-group discussions. 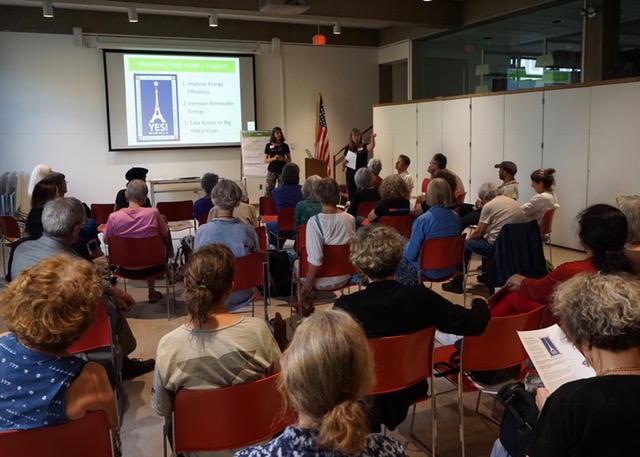 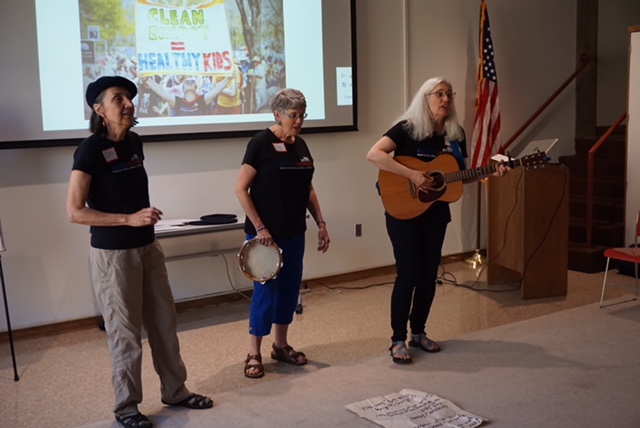 Walking the Talk at the US Conference of Mayors

Cambridge Mothers Out Front members were among the lively and vocal crowd gathered in Copley Square on the morning of June 8th to be sure that Marty Walsh and the other attendees of the US Conference of Mayors heard their message: that our cities need to be in the forefront of renewable energy innovation and infrastructure. 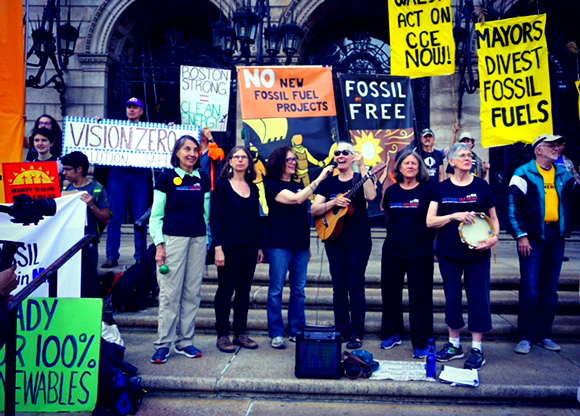 Music Out Front performing for the crowd gathered for the U.S. Conference of Mayors in Boston, June 8th. 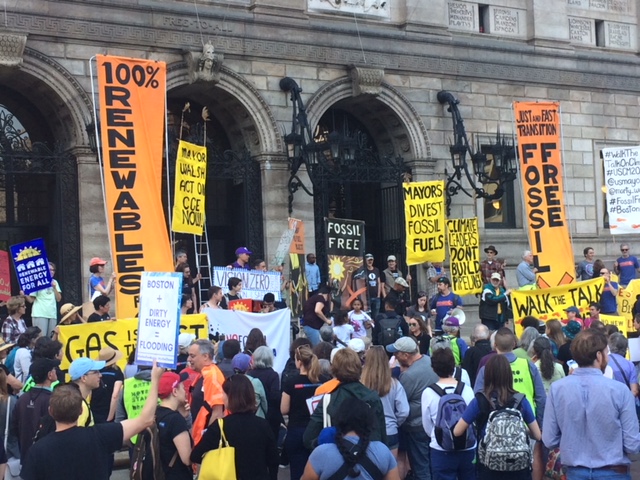 Mother Out Front and Columnist Felicia Mednick shares what Mother's Day means to her:

As a part of honoring the mothers in our lives, and as members of Mothers Out Front, we honor the many women who have organized mothers to take action. They give us strength to face the climate crisis, to raise our voices, and to organize. They took their messages to their communities, to the streets and to the halls of government.