On a sunny Sunday afternoon in mid-May, Mothers Out Front-Jamaica Plain held our first-ever Green Living Tour, showcasing a wide range of ways to “go green”—from electric cars and bikes to worm composting, induction stoves, air and ground source heat pumps, and backyard bees and chickens. The feedback from the 150+ participants was overwhelmingly positive: “I had no idea so many of my neighbors were doing so much to shift to a green lifestyle,”“we brought our daughter with us to help her take her role and responsibility for nature seriously,” “the tour gave us a much better idea of which direction to take to reduce our own carbon footprint,” “It was cool to get up so close to the hive – we even got a look at the Queen being a total BOSS LADY.” 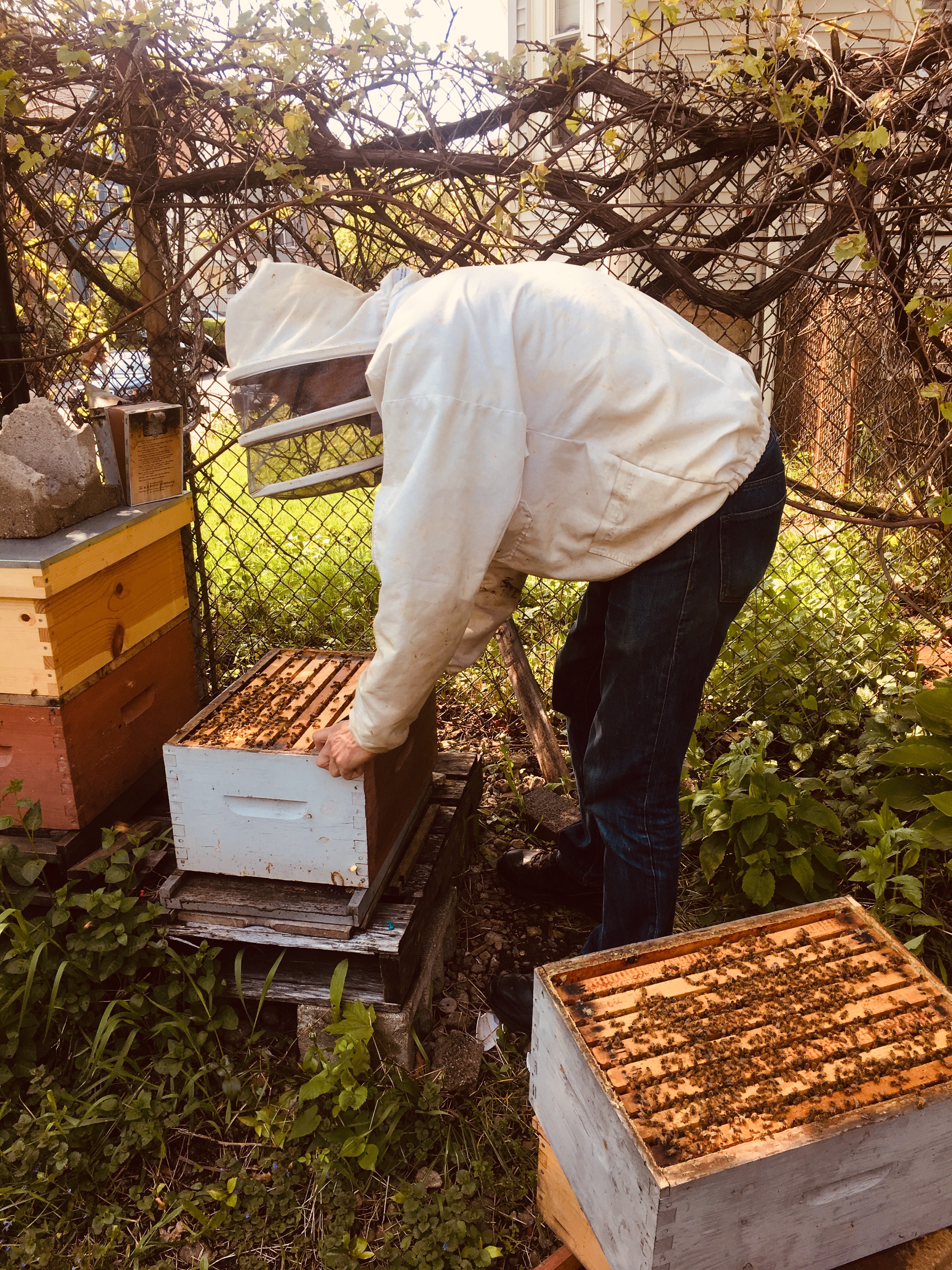 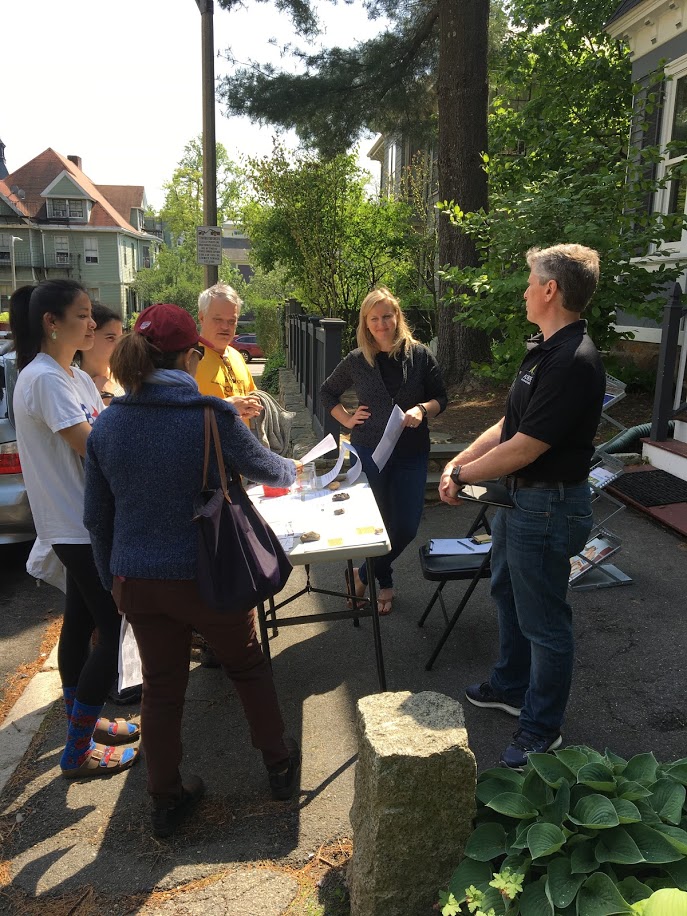 Terrific coverage of the Mothers Out Front Acton Team's art exhibit to change the conversation about #methaneleaks and to make the invisible, visible.

According to Judith Aronstein of Mothers Out Front Acton, an environmental activist group dedicated to addressing climate change, a 2017 survey funded by the Acton Board of Selectmen and completed by Gas Safety USA measured the size of some 234 gas leaks in town. These leaks were reported over time by National Grid to town the town Department of Public Works.

Aronstein said Mothers Out Front wanted to “make the invisible, visible” by finding a way to visually represent those leaks and their size to town residents to help them see the number and size of those leaks and discuss their impact.

She said the display was about eight months in the making. It was marked Tuesday evening by about 30 residents and community leaders.

Posted by Amber Cano-Martin · May 27, 2019 1:16 PM
Mothers Out Front's Gas Leaks Working Group launched on May 23rd with 20 people at the first meeting!
The team planned a “two-way street” learning opportunity to share what we’ve done so far and develop a shared vision of where we can go and what tools and support will take us there. Stay tuned for more information on our campaigns!
if you'd like to get involved, please contact Amber Martin at amber.martin@mothersoutfront.org. 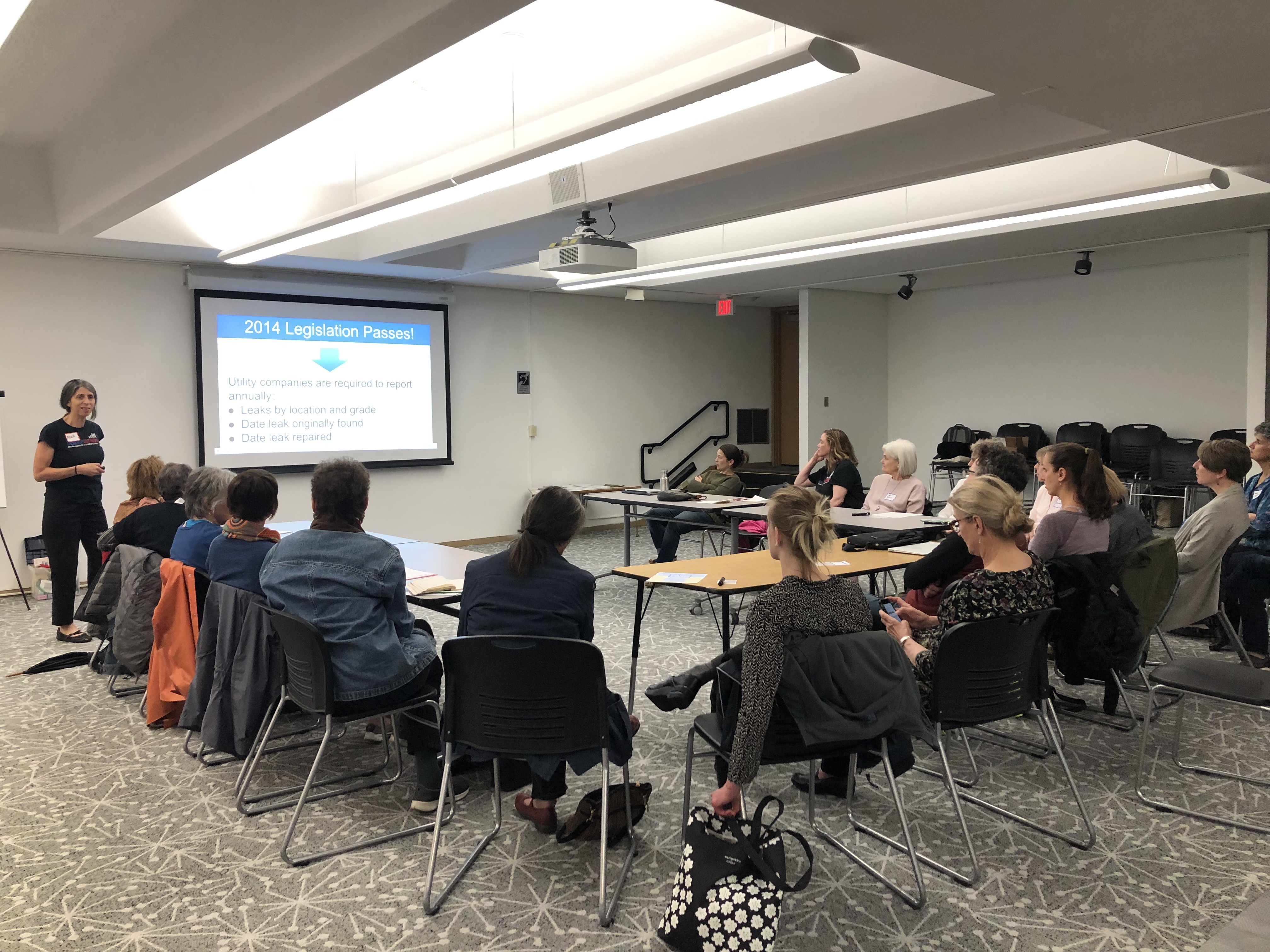 This opinion piece by Jesse Lederman is a nice tribute to the power of community organizing.

With the support of a coalition of organizations like the Springfield Climate Justice Coalition, Arise for Social Justice, Mother’s Out Front, and the statewide watchdog group HEET, we worked to bring the gas company together with local officials and community members, and in 2017 were able to announce a deal to repair these leaks over time, with a concerted focus on the largest leaks first. The announcement was the first of its kind in Massachusetts.

MothersOutFront was busy today!! We started out trying to talk to the Governor at the Green Ribbon Commission meeting but were asked to leave the premises. 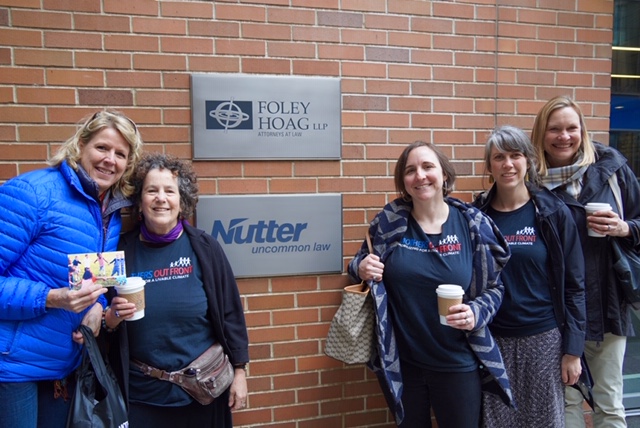 Report-in from the Worcester Team: Mothers Out Front co-cooordinator, Gaylen Moore, being interviewed at the Worcester Townhall on the Green New Deal, organized by Sunrise Worcester. Gaylen was interviewed by Telegram and Gazette reporter, Steven Foskett. We tabled at this event, and one of our leaders, Wahya Wolfpaw, an indigenous grandmother, also opened the event with an blessing.

Gaylen Moore of Worcester is a member of the local chapter of Mothers Out Front, a national environmental advocacy organization. The group has focused locally on raising awareness about unrepaired natural gas leaks near schools and day care centers. But Ms. Moore said Mothers Out Front’s goals are in line with the Green New Deal; she said natural gas is a contributor to climate change.

“We need to shift utilities to clean energy in a way that creates good jobs,” Ms. Moore said.

She said it frustrates her to hear people asking where the money will come from to fund Green New Deal initiatives. She said people need to instead ask what the cost is of doing nothing.

On the evening of Tuesday, May 7th, three members of the Mothers Out Front Worcester team, filed a petition to the Worcester City Council requesting a public hearing on Eversource's plans to fix current unrepaired gas leaks within fifty feet of Worcester Public School zones. We also asked that our city support the House F.U.T.U.R.E Act (An Act for A Utility Transition to Renewable Energy). 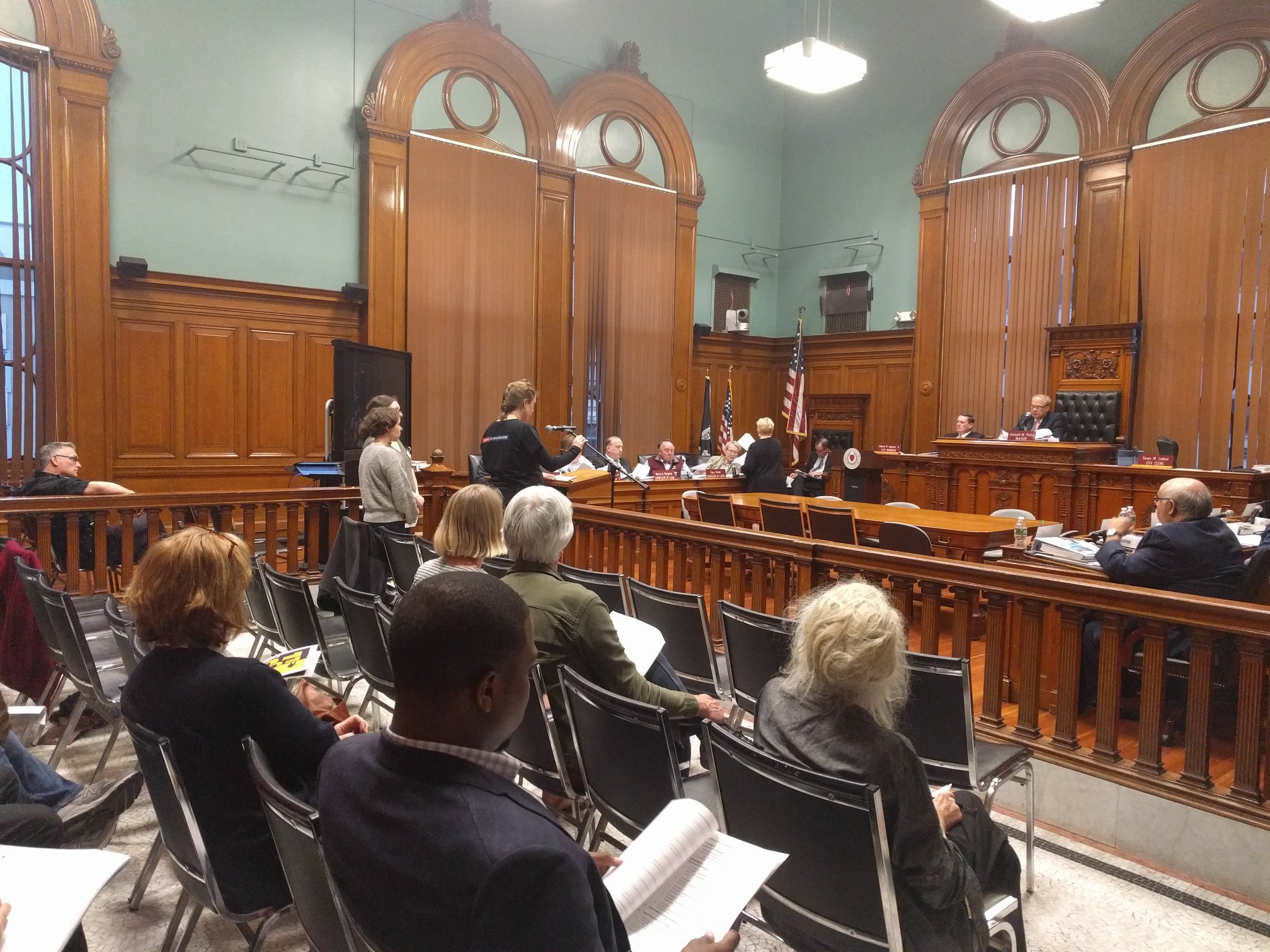 The concert included choral music by Koleinu and will feature Temple Emanu-El’s own Cantor Vera Broekhuysen, Cantor Michael McCloskey of Temple Emeth, Chestnut Hill, and a singalong led by Music Out Front, the musical arm of Mothers Out Front.

Cambridge Mothers Out Front enjoyed connecting with young people and asking them to write postcards to Gov. Baker, at the Global Warming Youth Summit at MIT in Cambridge. 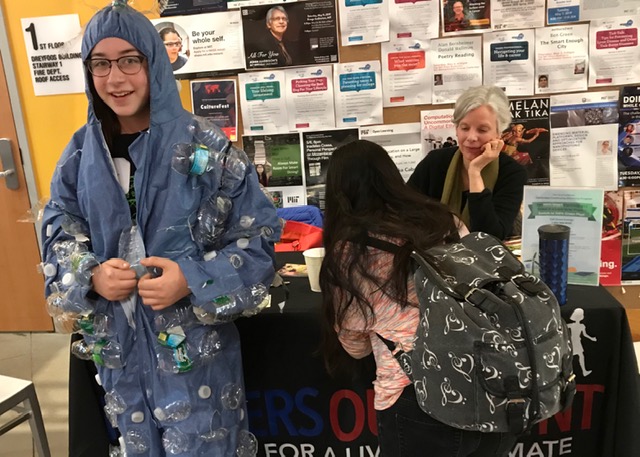 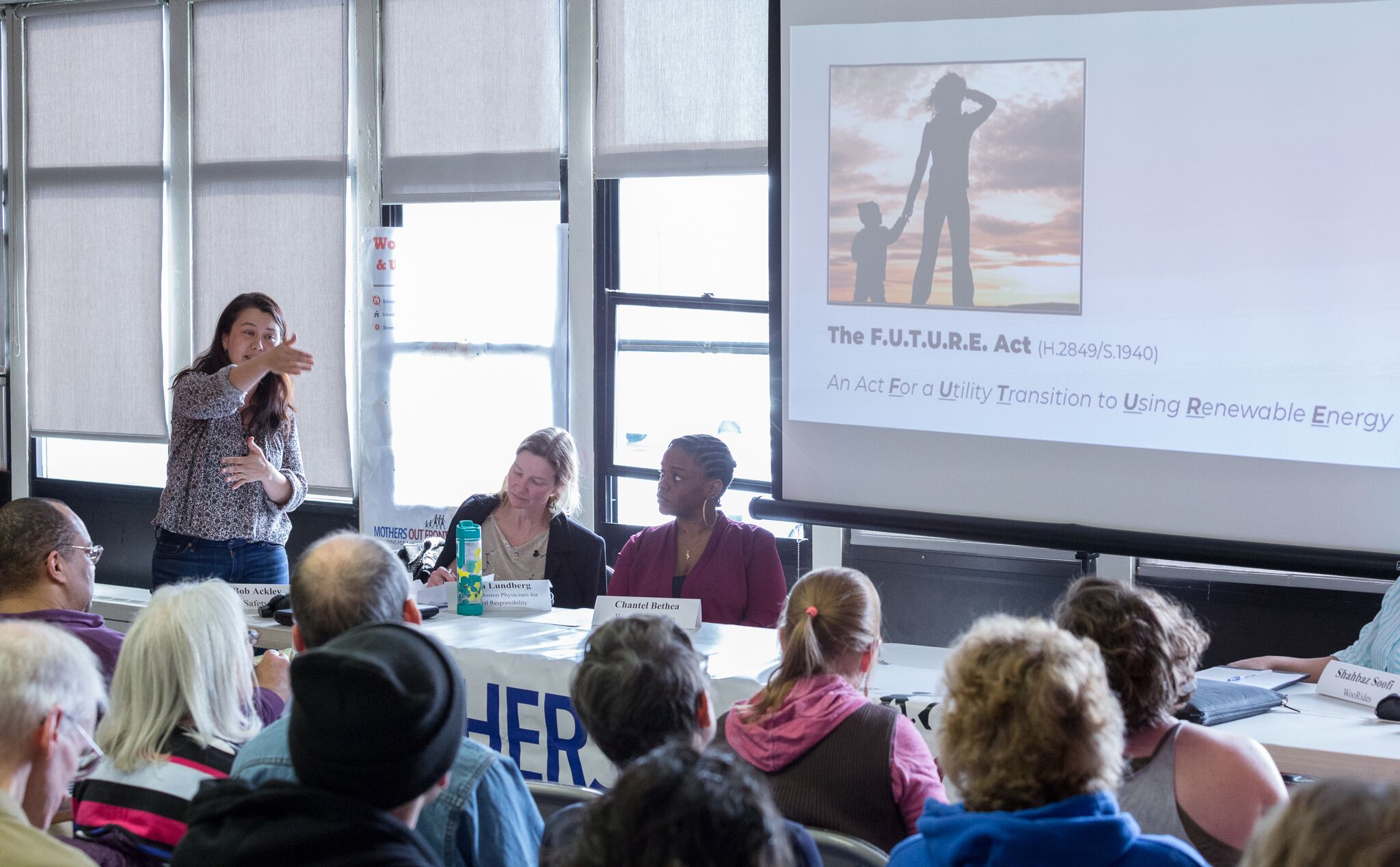 The forum attracted a crowd of fifty people who represented a wide cross-section of the Worcester community. In attendance, there were Worcester Public School parents, college students, community activists, environmentalists, residents concerned about gas leaks in schools, in the community and climate change, moms, dads, grandparents. 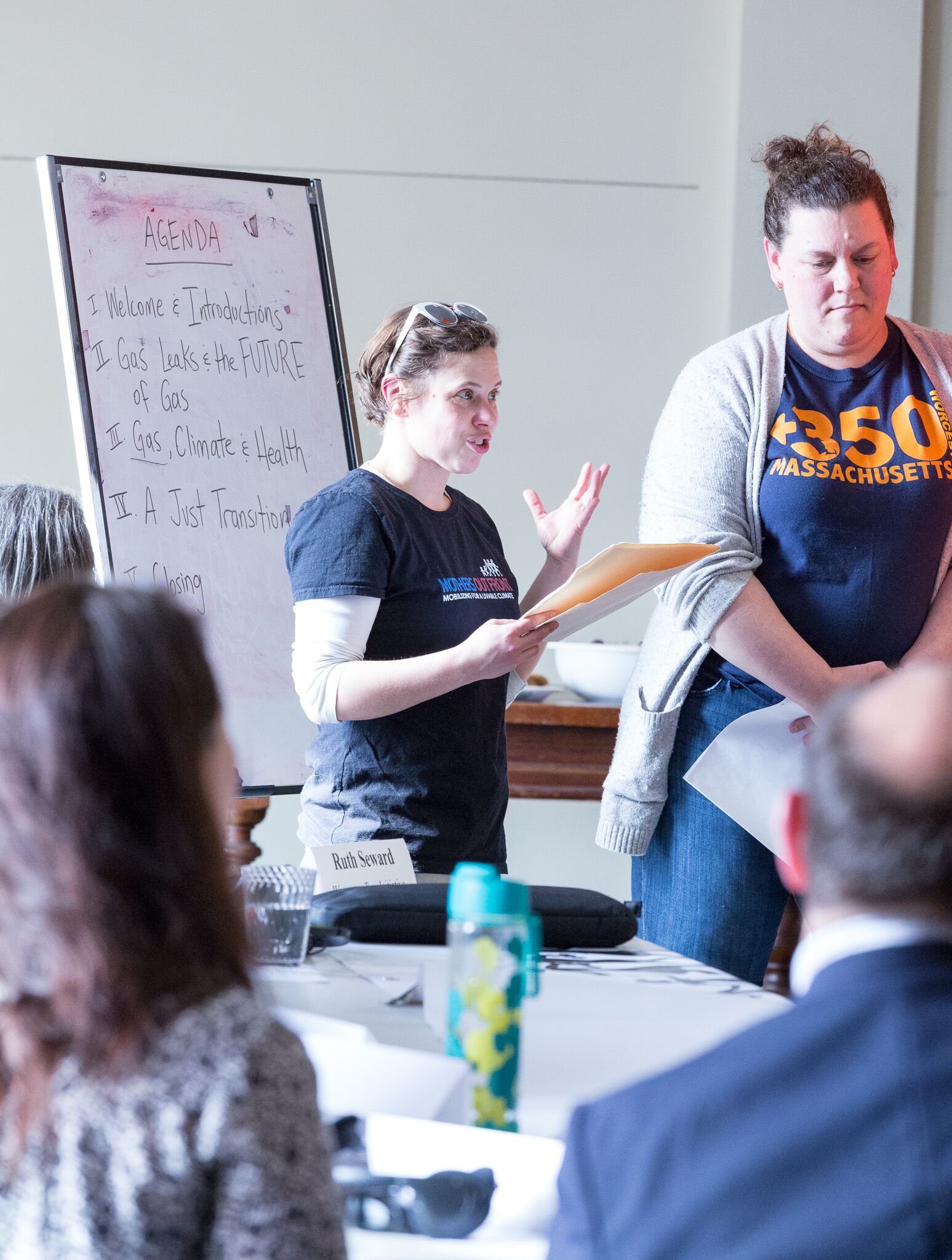 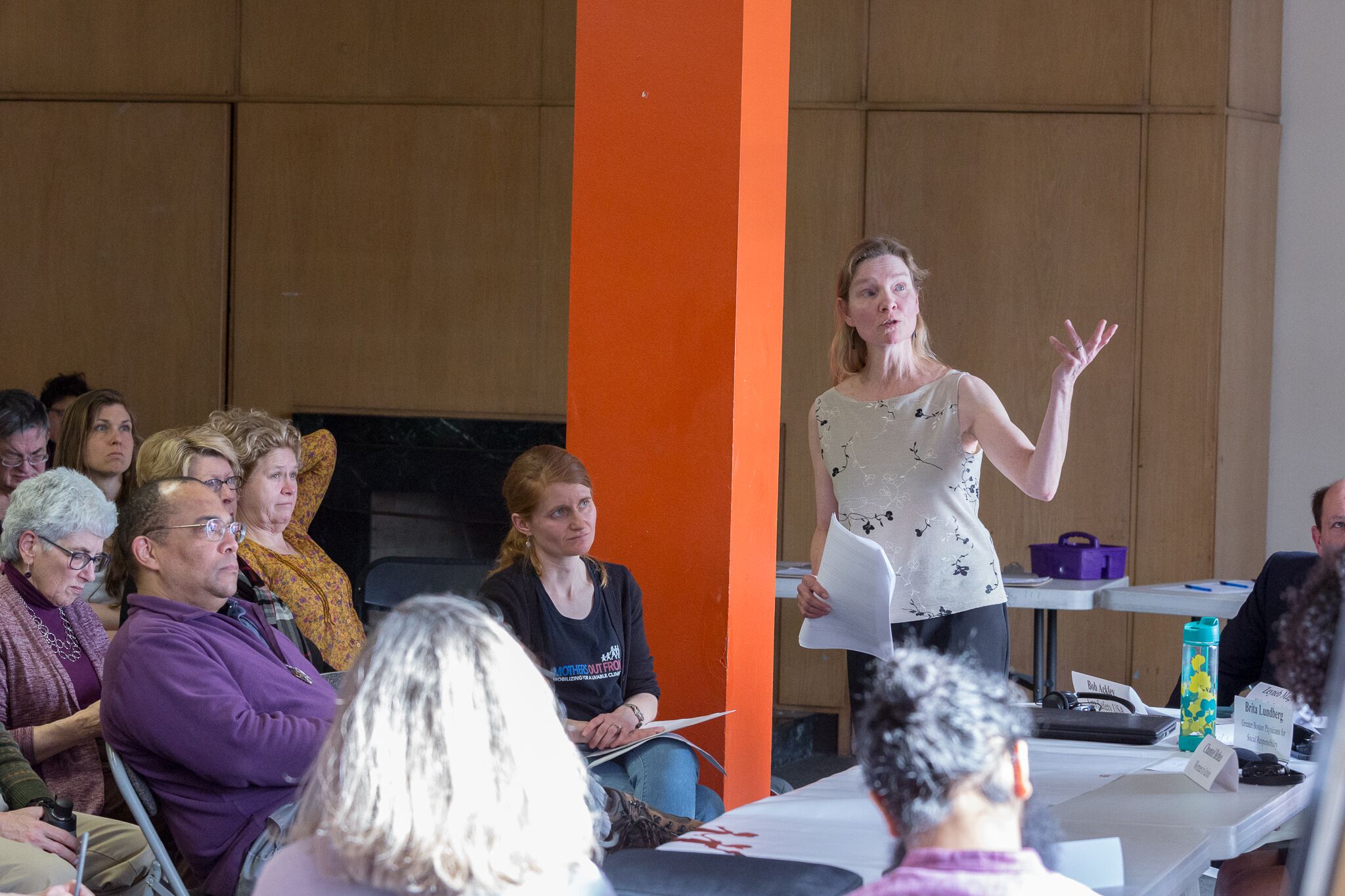