Mothers Out Front teams know the value of a Letter to the Editor to get the message out, and they want Bedford, MA to know all the benefits of the Community Choice Aggregation program.

Besides contributing to the reduction of  harmful carbon emissions—a huge benefit for all of us who care about our children’s futures—this program provides additional options and benefits to which most of us may not have given much thought. For more information about Bedford’s program, please check the website (https://bedfordcca.com/).

Worcester Mothers join the #ClimateStrike on 9/27

After a big victory getting a Climate Emergency Resolution passed leading up to the Youth Climate Strike, Worcester ended the week of action with a rally on September 27th. The rally started at the Lincoln Square Plaza with a few hundred people in attendance. The march continued a few blocks down Main Street and made a stop in front of the TD Bank. Mothers Out Front Worcester volunteer leaders Wahya Wolfpaw, Christina Wertz and Selina Gallo-Cruz were in attendance and marched with the Mothers Out Front banner. The group met with others in front of the City Hall steps for the remainder of the program.

Wahya represented Mothers Out Front Worcester as one of the speakers in the program. She pleaded with the adults in the rally to support the young people's leadership to protect our community against the climate crisis.

On Sunday, September 29th, Easthampton Climate Response’s group and Mothers Out Front had a gas leak tagging event. This event was sponsored by Easthampton's Democratic party.

We wanted to use the momentum created by last week's "Climate Awareness Week" to let Easthampton residents know about the leaks existing in Easthampton so we can gather people to pressure gas companies to repair these leaks. 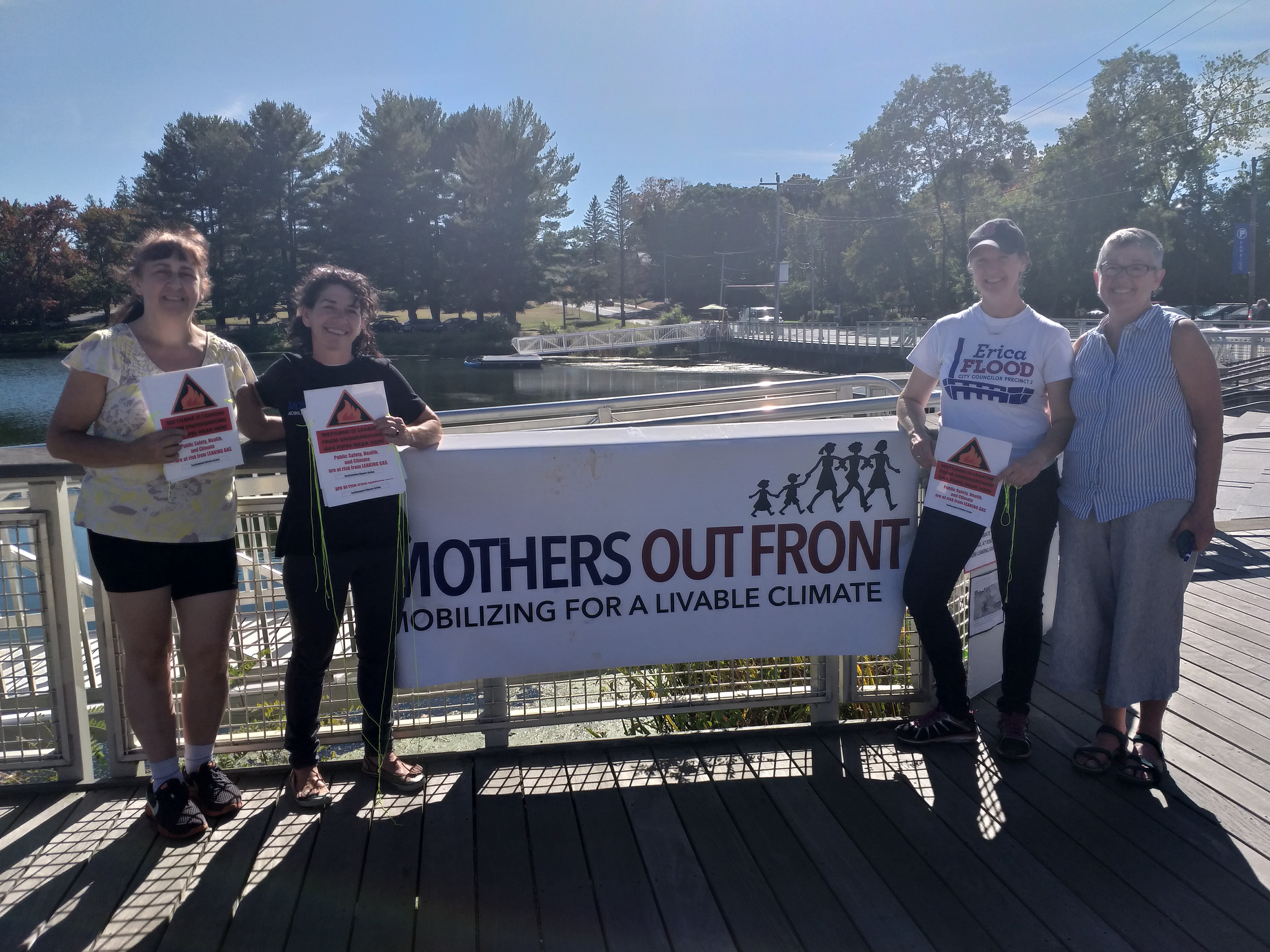 LTE: We need to build green roofs in Cambridge, joining other cities in climate change fight

Mother Out Front Florrie Wescoat asks an excellent question in her recently published Letter to the Editor at Cambridgeday.com and announces a new campaign from Mothers Out Front in Cambridge, MA:

Let’s take a bird’s eye view of Cambridge. We see mostly empty rooftops, and some with mechanical systems on top to protect them from flood damage. Many of the flat roofs are heat-absorbing black, which can reach upwards of 140 degrees Fahrenheit in the summer, increasing the city’s heat island effects. These aren’t the rooftops that a city such as Cambridge, which is committed to fighting climate change, ought to have, and we know it. Why aren’t we acting on what we know? Why don’t we have more white roofs that can reduce surface temperatures by an average of 43 degrees in the summertime? More solar collectors? Where are roofs with growing plants?

What I Learned from the Merrimack Valley Gas Disaster

Sarah Griffith is a friend of Mothers Out Front and a mother herself. A member of Climate Reality Project, she shares her thoughts on the anniversary of the Merrimack Valley gas explosions.

Last September 13, three towns in Massachusetts went from a calm, 70° day to a conflagration in minutes. A series of explosions followed by eighty fires suddenly broke out. Roads were chaos as electricity and street lighting went down, communications infrastructure failed, and visibility was cut by billowing fumes. One person died, dozens were injured, and 30,000 people were evacuated. Over a billion dollars has been spent refurbishing 8,500 homes and repairing miles of gas pipelines.

Given the scale of ongoing tragedies in the paper everyday—mass shootings, hurricanes, and political corruption—I have to admit that it was hard to take in the implications of this massive event immediately. It was only over time and by volunteering with Gas Leaks Allies that the dangers of the gas distribution system started to become apparent.

On the anniversary of the "catastrophic failure in the gas distribution system that caused explosions and fires in the Merrimack Valley" on September 13, 2018, Mothers Out Front remembers the community's sacrifices and strength in overcoming the complete disruption of their energy system and their lives. We are proud to be a part of Gas Leak Allies newly released report Rolling the Dice: Assessment of Gas Safety in Massachusetts as "this report is the response of citizens and scientists motivated by a desire for a safe, healthy, and just energy system."

Rolling the Dice: Assessment of Gas Safety in Massachusetts analyzes documented incidents and publicly available data about the gas distribution system that add up to an urgent message to legislators, the executive branch, municipalities, and gas companies to take action now. It details ways that each of these decision-making entities can implement changes that will greatly enhance public safety in the near term and in the future.

Mothers Out Front Concord takes it to the source! Congratulations to the team on being #inthenews and changing the conversation! Thank you to Concord Wicked Local for covering this issue.

“We’re here to hold them accountable, make them comply with the regulations and to keep their promises to measure and fix these gas leaks,” Davis said. “The reason we’re so fired up about this is because they’re over 16,000 gas leaks in the state of Massachusetts. And the methane that leaks out is 10 percent of our emissions in the state. It’s the same amount of emissions that all the business and stores in the whole state (discharge). It’s a huge greenhouse gas emitter.”

Read all about it!

Mothers Out Front Somerville is taking on National Grid, together with other teams throughout Massachusetts, to #FixBigGasLeaks!

“I’ve been in the same house for the last nine years and, like every other resident in East Somerville, I’m in National Grid territory,” she said. “I’ve known for years about gas leaks in the area — it’s been an ongoing problem for 20 years — but I started getting involved in Mothers Out Front in Somerville because I knew they were raising awareness about leaks as a safety threat and an environmental threat.”

Mother Out Front Susan Lees#InTheNews and demanding that Governor Baker stand by our communities and our families rather than fossil fuel interests.

“Permitting this dangerous and toxic facility next to neighborhoods where residents raise families, send their children to school, and build communities is deeply negligent,” said Susan Lees of Mothers Out Front, an environmental activist group. “Governor Baker must show that he has the backbone to stand up to large energy corporations and intervene in this broken permitting process.”

MA - WORCESTER! We want to send a huge shoutout to Mothers Out Front Worcesterfor their incredible progress on gas leaks this month, including TV press coverage (below), interviewing Gaylen Moore and Patricia Kirkpatrick. The team has been working to get gas leaks fixed at elementary schools and to highlight the health risks of gas, particularly for children. Worcester has one of the highest rates of asthma in the nation.

With gratitude and congratulations to the team!