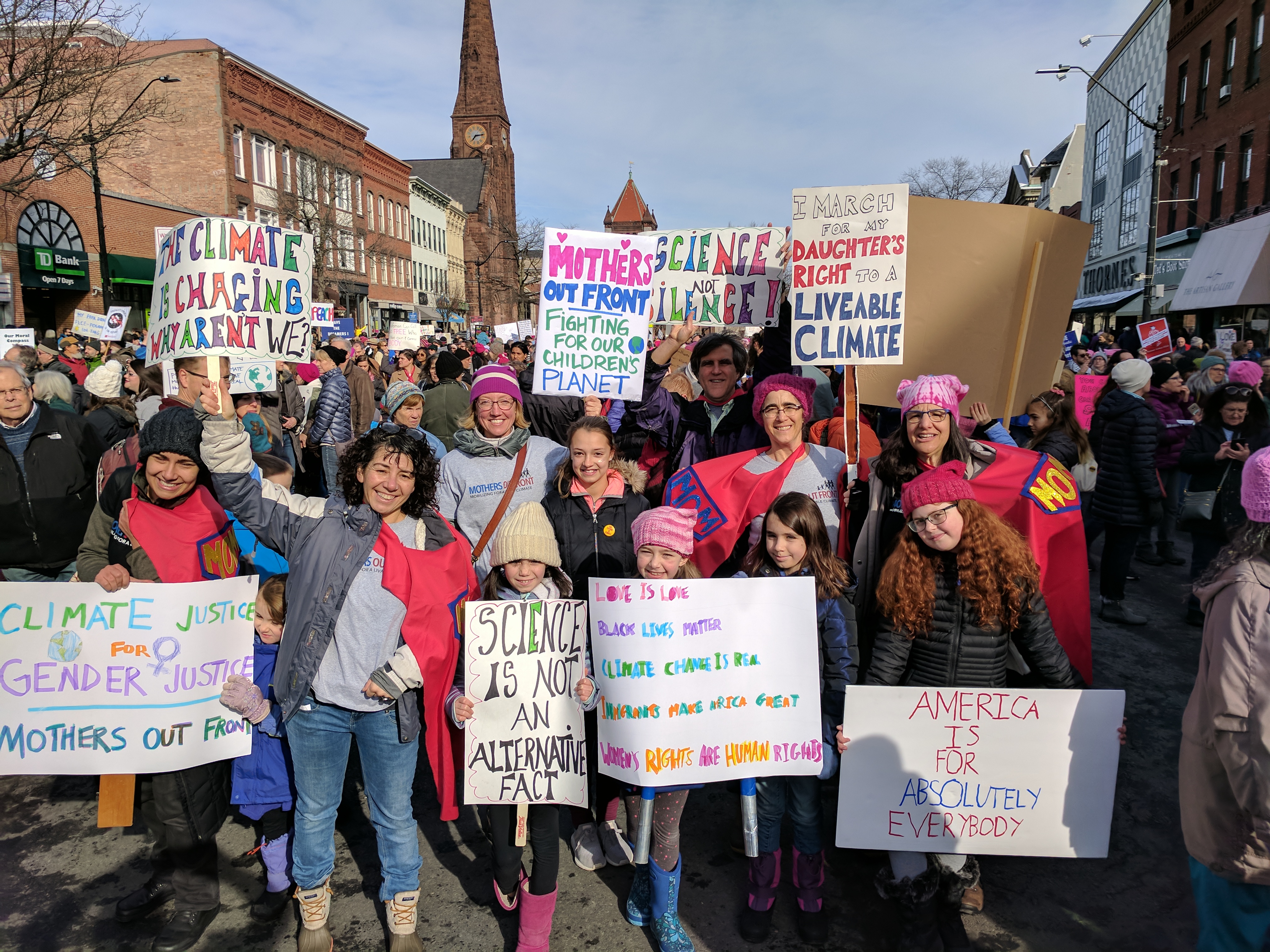 Welcome! We're glad you found us!

We are mothers and others speaking with the roar of a mother bear, fighting for a just, healthy, clean energy future for all children.

Are you urgently concerned about climate change? So are we!

The Pioneer Valley Mothers Out Front communities are vibrant and growing. We have two organized chapters, in Amherst and in Northampton, with many members all over Western Massachusetts.

We hold regular meetings/discussions, sponsor actions and forums, meet with local and state officials, arrange family potlucks and outings, host speakers, and partner with other climate change-related and justice organizations, so check out our Facebook page to stay up to date.

Our chapters are made up of open-hearted and dynamic women who actively engage mothers, grandmothers, and others to do something NOW about our children's future.

If you want to join in, there are plenty of opportunities, big and small.

Honk If You Oppose a Biomass Plant in Springfield!

In September, Mothers Out Front Pioneer Valley members joined with other advocates to oppose the biomass energy project in Springfield, MA.  Organized by the Springfield Climate Justice Coalition, the protest included a COVID-safe in-person rally outside Springfield City Hall, along with a small but mighty car caravan protest. Mothers Out Front members accounted for 3 out of the 7 cars that looped around City Hall, honking our horns and displaying signs and creative renderings of dirty smoke stacks and inhalers. We showed up in order to join in solidarity with the residents of Springfield and to add our voices (and beeps!) to the messages that local advocates have been leading on for years.

Building a biomass plant that would burn wood for energy would harm both human and ecological health.  The emissions produced would pollute the air and exacerbate existing public health crises (in addition to spewing carbon dioxide into the atmosphere, while removing trees which sequester carbon from the atmosphere).   Springfield has long suffered from poor air quality, and is already known as the "asthma capital" of the United States.  A new biomass plant should not be built anywhere in Massachusetts, and certainly not in a city that is already bearing the burdens of existing air pollution. Low-income communities and communities of color have continued to suffer from the impacts of dirty power plants, incinerators, toxic waste dumps, and complex highway systems in their neighborhoods. Massachusetts must not continue this destructive pattern.

Opposition to building a biomass plant in Springfield has been ongoing for many years.  In fact, last year Mothers Out Front joined a similar protest organized by Arise for Social Justice and other local advocates.  Each rally brings a sense of optimism that this will be the moment that Governor Baker and other state and local leaders will permanently move on from this harmful project. This should be the moment to invest in building additional renewable energy projects to meet our energy needs as well as our critical climate goals.
Rally organizers had two immediate asks: That city officials not renew permits to build the incinerator, and that the legislative Conference Committee working on the climate change bill remove language that would classify biomass incinerators as "non emitting sources" of energy (exclude biomass from Section 15 of the state renewable energy portfolio).  If you are a Massachusetts resident, we hope you'll join us in contacting your local legislators to ask them to urge the committee members to make this important change.  Every child deserves to have clean air to breathe.
You can read media coverage of the event here.

We hope that you will join us for one or more of these local (if virtual) Earth Day activities with coalition partners.  And please do get outside with your kids and celebrate our living earth directly!

(You could do one piece of art for all three calls below for art by combining Heal Our Earth, Extinction Rebellion symbol, and renewable energy images)

Summary Schedule of Events with our community:

New Gas? No Thanks! We're Going with Clean Energy and Energy Efficiency.

Mothers Out Front Pioneer Valley is working with other organizations in the Valley to plan for a just transition to 100% renewable energy. We are working to:

1. Use less energy overall by increasing home and municipal energy efficiency and conservation. MOF in Amherst and Northampton helped to pass local resolutions for 100% Renewable Energy. We are part of a Valley-wide coalition that successfully stopped a plan by Columbia Gas for expanded infrastructure.

2. Convert our buildings from gas and oil heat to electric.  In Northampton, we helped to lead a city campaign to convert home heating and cooling to highly efficient mini-splits. In Amherst, we passed a bylaw mandating Zero Energy new municipal buildings which means fossil fuels cannot heat or power new Town buildings.

3. Build local renewable energy sources. We helped launch an inter-municipal collaboration to localize and green our energy sources, create local jobs, and let our communities choose their energy future using an expanded model of Community Choice Aggregation (CCA 3.0). Members in Pelham on the Select Board and Energy Committee are overseeing expanded solar and resilience development.

4. Pass state legislation that will help move Massachusetts off of fossil fuels in the transportation and building sectors in a just transition to electrification and renewable heat. The priority bills are Rep Benson's Carbon Pricing bill, H.2810, The FUTURE Act, S.1940/H.2849, and two Environmental Justice bills, S.453/h.826 and S.464/H.761. For more info on Mothers Out Front Massachusetts legislative priorities click here.

What Can I Do?

Read about taking our children to the State House to Talk Climate!

In March, we turned out for the Amherst Student Strike because Mothers have students' backs!

We marched for women and our children.

We brought Zero Energy experts to speak to Town officials and the public.

We planned and networked. 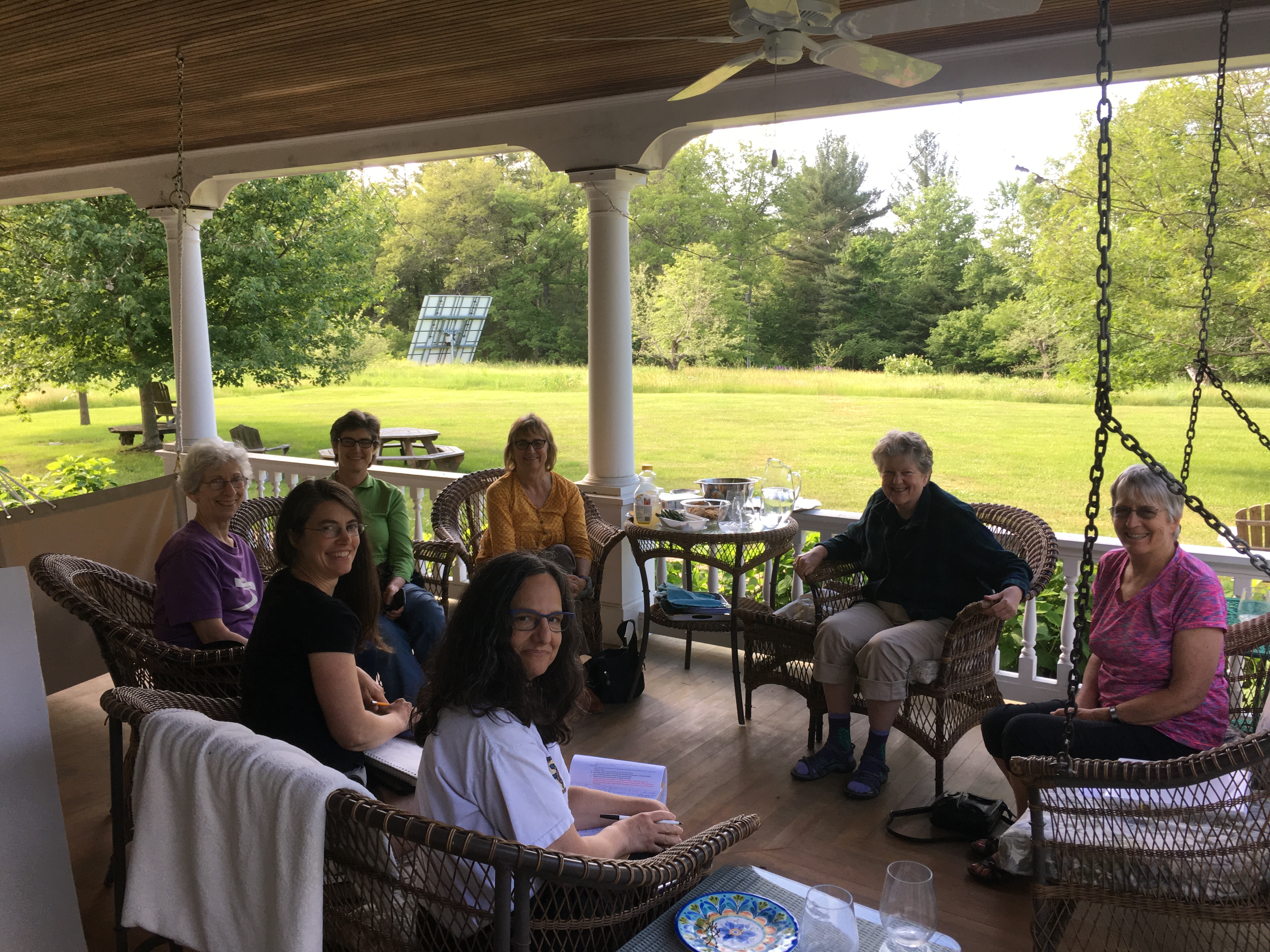 We asked candidates for local offices about climate and justice

We asked the candidates for Amherst Town Council to complete a survey about their positions on climate and environmental justice.

The 2018 election was a great day for women nationally, across the state and here in Western Mass. That held true in the Amherst town election too where 9 of the 13 Councilors are now women.

We marched in the Greenfield Women's March. 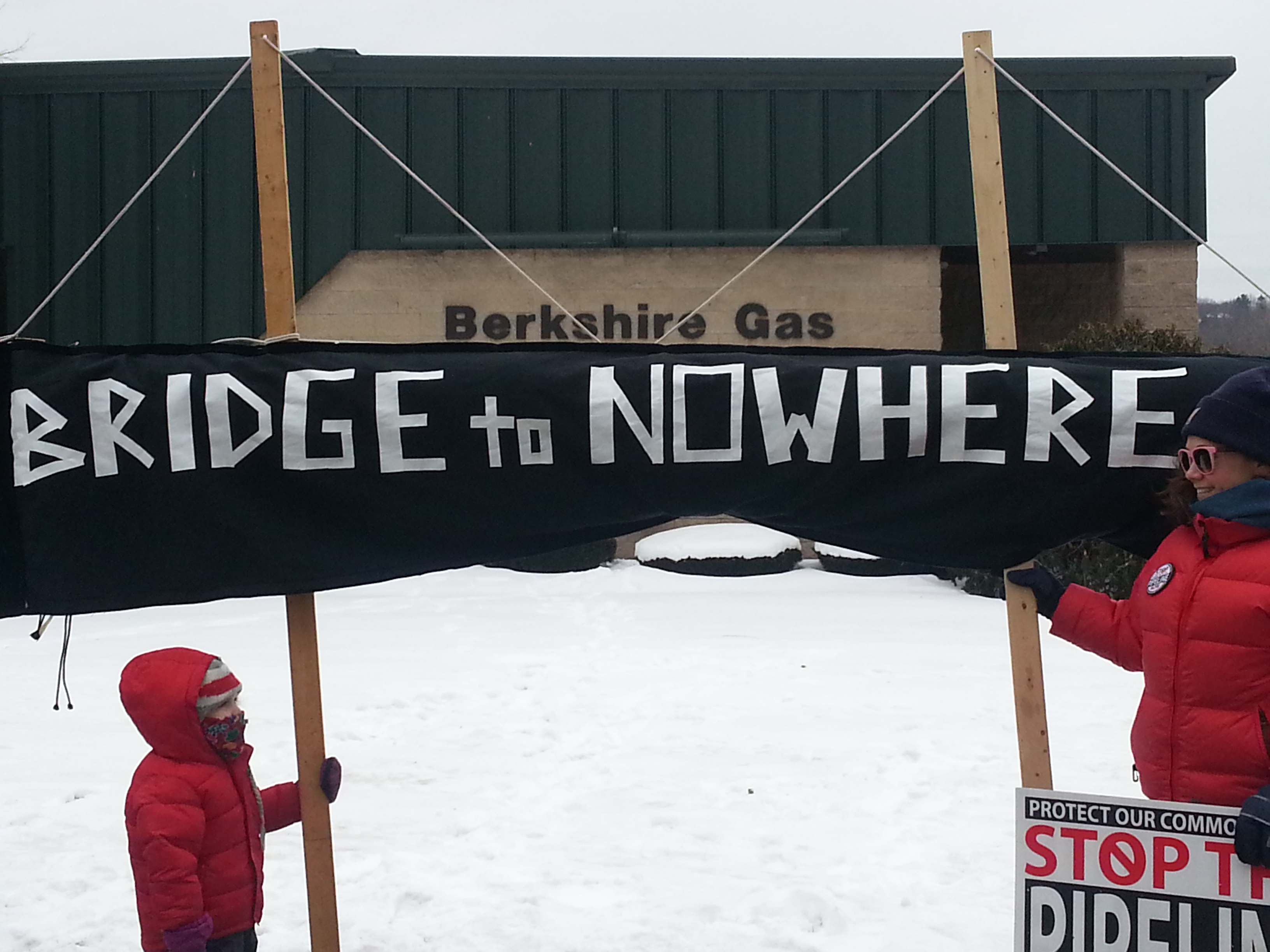 Over the spring and summer of 2016 we brought attention to the hundreds of gas leaks in our neighborhoods all over the Pioneer Valley.

At the Amherst Sustainability Fair in April, 2016 we debuted our map of Amherst with holes where the unrepaired gas leaks were. Children played at throwing corks through the holes to "plug the leaks" while parents talked with us about our work for a livable future for our kids.

We co-sponsored a June presentation by Ania Camargo of Mothers Out Front, Boston, about the dangers of gas leaking under the streets of every town and city. Below are the leaks from 2015. The Yellow tags mark unrepaired leaks.

We joined in The World We Love...

Mothers out Front members were involved in all aspects of the spectacle. Then we and our allies led the crowd to tag gas leaks in all directions from downtown Northampton.

The Daily Hampshire Gazette carried a two page spread in the Calendar section the next week of photos of the event.

...and tagged gas leaks in Northampton!

The Climate talks in Paris started on November 30th, 2015. On Sunday, November 29th, Mothers Out Front, Pioneer Valley, co-sponsored family-friendly local gatherings with Climate Action Now and faith communities. We shared our commitment to a clean, healthy future for the next 7 generations.

On Thursday, June 11th, 2015 we were in Greenfield  for a hearing with the MA Department of Public Utilities. Four Mothers Out Front leaders testified about why new pipelines are not in the public's interest. We told the Baker administration we want renewable, diverse sources of energy for our children's future. The entire 4 hour hearing is here. Below you can see the full house of 700 people and our own Alisa P. chatting with one of the union guys who came to support the pipeline because Kinder Morgan employs their union.

On January 23rd, 2015, Pioneer Valley Mothers Out Front was featured in an article on our Switch Campaign in the Daily Hampshire Gazette.  Check it out here.

We gathered with our families and switched to clean energy.

We marched in NYC in the People's Climate March

On November 21st, 2014, Pioneer Valley Mothers Out Front went to Boston for the Climate Crossroads, Climate Choices rally. We stood on the Governor's front steps representing two futures, the dark of increasing fossil fuel infrastructure and the bright colored future we have chosen by reducing our energy consumption and switching to clean electricity.